CENTENARY OF THE ARRIVAL OF THE TRAIN 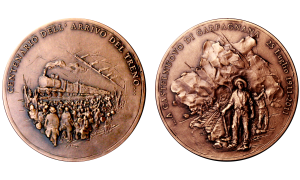 July 25, 1911, the train arrived for the first time in Castelnuovo di Garfagnana. On the occasion of the 100th anniversary of the Pro Loco of Castelnuovo he wanted to celebrate the event with the minting of this artistic medal. On the front is depicted the arrival of the train in the station overflowing with enthusiastic crowds; on the back it was intended to represent the hard work and sacrifice of the workers to open the railway line to also symbolize the struggle that faced the Valley to get that missing goal. 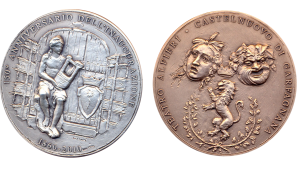 Medal commemorating the 150th anniversary of the inauguration of the Teatro Alfieri, took place on August 22, 1860. On the right depicts the rampant lion symbol of the city, and the masks of tragedy and comedy, classic iconography of the theater; on the reverse stands out against the backdrop of the theater scene, the figure of Apollo, god of music, and the coat of arms of the noble Carli family to whom we owe the initiative of the construction.

60TH ANNIVERSARY OF THE CONSTITUTION OF PRO LOCO OF CASTELNUOVO 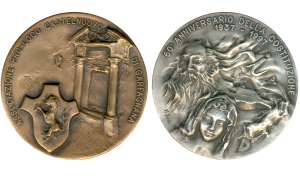 Medal commemorating the 60th anniversary of the Pro Loco of Castelnuovo Garfagnana (1937-1997), with figures relating to the activities of the Association on one side and on the other the square and the entrance of the fortress.

“GROSSETTI” OF GARFAGNANA – REPRODUCTION OF COINS FROM MINTED ESTENSI FOR GARFAGNANA 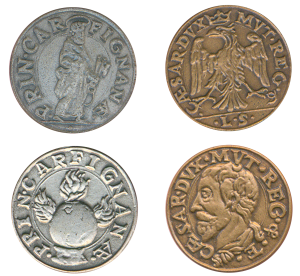 Reproduction of two coins minted made by Duke Cesare d’Este after a favorable ruling by the Senate of Milan in 1606 which assigned the possession of the Garfagnana to the Duchy of Modena.
The Duke did beat the two “Grossetti” to highlight the supremacy of the House of Este, our province but also to thank the people of Garfagnana fidelity then demonstrated.