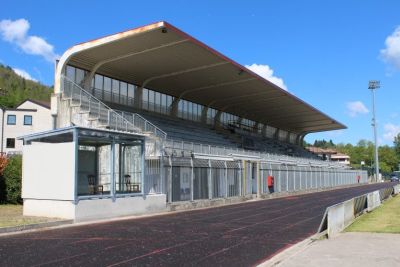 It has not yet turned off the echo of the great success of the charity show “Che Quasimodo amò Esmeralda” brought on stage Saturday 14 and Sunday 15 from “Mercantidarte” at the Teatro Alfieri. The event was intended to contribute to the costs for equipping the city stadium to a station for the disabled.
The box reserved for people with disabilities, allowing them to attend the Castelnuovo home games and all the events taking place at the stadium safely and with equal visibility than the stands, was officially opened on Sunday, May 22 at 15.00 within the 10th juvenile cat Tournament. football learners Memorial Federico Pisani.
Before the Grand Final, the presence of city authorities, “Mercantidarte” handed the envelope containing the receipt of the evenings at the US Castelnuovo executives that will be used, with the support of Banca Mediolanum, to equalize the costs of the work.
The new building can be considered a credit to Castelnuovo.
The realization of the work, strongly supported by the local administration, intends to be the first small step towards a steep and difficult path with minimization of architectural barriers.

This site uses Akismet to reduce spam. Learn how your comment data is processed.